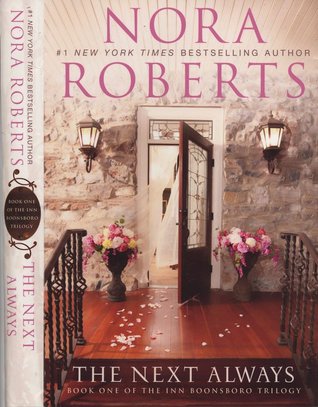 The historic hotel in BoonsBoro, Maryland, has endured war and peace, changing hands, even rumored hauntings. Now it’s getting a major facelift from the Montgomery brothers and their eccentric mother. As the architect of the family, Beckett’s social life consists mostly of talking shop over pizza and beer. But there’s another project he’s got his eye on: the girl he’s been waiting to kiss since he was fifteen…

Beckett and his family, brothers Owen and Ryder, and their mother are refurbishing a historic building in town to make it into an inn.  Meanwhile, widow Clare is taking care of her three sons and running her bookstore, while brushing off the advances of sleazebag Sam.

Beckett has been in love with Clare since they were 15, but she was in a relationship with Clint, the man who would become her husband, and he joined the military and they never looked back.  Beckett’s crush never went away, but he kept it on the back burner when she returned to town after Clare’s husband was killed overseas. Beckett is content to get his daily trek to her bookstore for coffee, but they are getting thrown together more often, especially when Clare offers to write the copy for the Inn’s brochures. Add in a ghost that seems to think they belong together, and it’s just a matter of time before Beckett acts on his feelings.

Nora Roberts books seem to be a little bit hit or miss for me, but the series are usually really good.  This is the first book in the Inn BoonsBoro series and, in keeping with tradition, it was great.  Clare was smart, responsible, funny.  She was a great mother.  I loved those boys, maybe because I have two of my own, but they were kind of awesome.  And the big boys, Beckett and his brothers, gave me a lot of hope for the future.

Like all of Robert’s books, there was a lot of detail and minutae, in this case regarding the restoration of the Inn.  Sometimes, it can get a little tiresome, but this time, I didn’t mind it so much because it really painted a picture of the place and made me wish I could visit it (apparently, the place is real, so maybe I will be putting Maryland on the list of places to vacation in the near future.)   The rooms in the Inn are named after famous couples, like Elizabeth and Darcy, Westley and Buttercup, Jane and Rochchester (you can check out the real inn’s website to see the rooms: Inn Boonsboro).

The relationship between Beckett and Clare started off kind of quickly, probably because he had these feelings for her and suddenly they’re about to kiss and she is attracted to him, when she didn’t show any kind of attraction before.  But that was maybe because she was so caught up in her own life, with her boys and the bookstore, to see Beckett as an option.  Regardless, the connection was believable.  As was Clare’s insistence to not have to depend on anyone else when she had been taking care of herself and her boys and her life alone for so long.

The rest of the story, relating to the town and the residents that inhabit it, was entertaining.  I loved Avery, Clare’s best friend and the owner of the pizza joint in town, and Hope, the “Innkeeper”.  I also really liked Beckett’s brothers, meticulous Owen and ornery Ryder.  They made me smile every time they were around.  They will, of course, be the subjects of the next books, for which I am very anxious.  Why can’t books in trilogies all come out at the same time!?!?!

4 thoughts on “The Next Always by Nora Roberts”