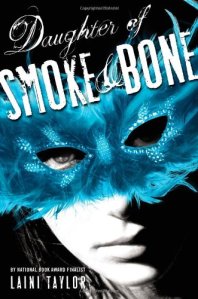 Around the world, black handprints are appearing on doorways, scorched there by winged strangers who have crept through a slit in the sky.

In a dark and dusty shop, a devil’s supply of human teeth grown dangerously low.

And in the tangled lanes of Prague, a young art student is about to be caught up in a brutal otherwordly war.

Meet Karou. She fills her sketchbooks with monsters that may or may not be real; she’s prone to disappearing on mysterious “errands”; she speaks many languages–not all of them human; and her bright blue hair actually grows out of her head that color. Who is she? That is the question that haunts her, and she’s about to find out.

When one of the strangers–beautiful, haunted Akiva–fixes his fire-colored eyes on her in an alley in Marrakesh, the result is blood and starlight, secrets unveiled, and a star-crossed love whose roots drink deep of a violent past. But will Karou live to regret learning the truth about herself?

Favorite Quote:  Happiness. It was the place where passion, with all its dazzle and drumbeat, met something softer: homecoming and safety and pure sunbeam comfort. It was all those things, intertwined with the heat and the thrill, and it was as bright within her as a swallowed star.

Karou is a seventeen-year-old art student in Prague, going about her life like any other seventeen year old, caught up in her ex-boyfriend, hanging out with friends, etc.  But she’s unlike any other teenager because she knows of a different world, inhabited by the Chimaera, animal hybrids, who raised her in a dusty little shop.  She has secrets and powers, and she’s forever running “errands” for some mysterious someone, sometimes gone for days at a time.  Not that she actually knows what’s going on, she just does what she’s told.

The errands she runs involve collecting teeth, but what happens to the teeth, she has no idea.  Of course, no one ever explains anything to her, which I understand can be frustrating.  So like any good teenager, she takes it upon herself to uncover any secrets she can.

Basically, what it amounts to (and I’ve been kind of dancing around because I didn’t want to give anything away, but there’s no way to do a review of this book without coming out and saying it), is a war between Angels and demons (the Chimaera), into which Karou is in some way a part of.

I think this is my first book about angels, so pat myself on the back for that.  But the angels that inhabit the world of this book are pretty much unlike anything I would assume angels to be.  Basically, they seem to  be humans with wings. They’re not benevolent, holy, infalliabe, or uncorruptible…OH, and are incredibly, undeniably, intractably beautiful.  From what I could understand, there didn’t seem to be much of a religious affiliation.  This “other world” that they inhabit doesn’t really seem to he “heaven” (unless I’m reading that wrong), but more like another dimension. And the only way to move from their world and ours is through portals, and the shop that Karou grew up in connects the worlds together.

I don’t know what I was expecting beginning this book, but it was so much more than even that.  The story, while utterly brilliant and different, was entrancing.  I really wanted to know what the heck was going on, who Karou was and why Akiva was so captivated by her.  Sure, she was awesome and kick-ass, but he was an ANGEL, and hella-hot.  She was this blue haired, tattooed human…why was she so special?

Ms. Taylor’s writing is so poetic and beautiful, I really cannot do justice to how lyrical this book is.  The writing and story itself is good, great even, but the way she describes things…is so rare in books these days (the ones I read, anyway), and reminded me of the beauty of other books and stories, especially the book The Historian  by Elizabeth Kostova (and that is quite a compliment, coming from me).  Anyway, I obviously don’t have her way with words, so I will leave you with this:  READ THIS BOOK.

15 thoughts on “Daughter of Smoke and Bone by Laini Taylor”