So the movie starts tonight. Let us discuss what we hope/believe/have prejudged by the myriad of information/previews/photos we’ve seen of this movie.

So how will it be compared to the book?

It’s hard to imagine how it could end differently.  Could they try and be dramatic and end it with the berry scene?  It’s safe to say most of the people that are going see the movie have read the books so that would be a load of crap.  Commit to the end of the actual book?  Please!  Of course what I really want to see are the interviews at the end.  It’s hard to think of Katniss as this soft and innocent girl curled up next to Peeta on the sofa in the Capitol.  I do like the way the book ends, leaving you wanting more, knowing it isn’t over but at the same time not a huge dramatic ending.

I think they will have to cut the cave scenes down dramatically.  From everything I’ve seen (trailer wise) there is a lot of action and I’m thinking though the entire games are told from Katniss’s POV they obviously have to show the gamekeeper, the crowds reactions, etc.   If they don’t what kind of dialogue are we going to have?  On this same train of thought I’m thinking her alone time in the trees is going to be cut too.  But please, please, please don’t cut when she yells for Peeta!  God Bless America I love that boy!  Though upon investigation online I did find out it is over 2 hours long so who knows, maybe they didn’t have to cut too much but I better see a little smoochy something!

First let me start with how much I love this series.  It is only second to Harry Potter (of course I do realize I’m saying that before I see the movies, but I can tell you book wise Potter is #1, the movies are yet to be determined. :P).  That’s right; I love it more than Twilight.  Before I get any kind of hate mail, please note I do love Twilight, but it is a distant third to these two epic series. (Of course I own copies of all three. 🙂 )

Side note:  Did everyone hear that there is a new trailer for Twilight playing before HG?  Whoot!!  Of course I already did see a little something because I went to the midnight DVD release of Breaking Dawn Part 1 to see the 5 minutes exclusive clip @ Target.  Totally worth it even though I had to put up with a crazy Twi-hard fan who talked to me nonstop about how it was Taylor Lautner’s birthday at midnight too, something that is now burned into my brain regardless of if I want it to be there.

Overall I can tell you I’m happy.  They didn’t dip into any other major franchise and started their own which I liked.  I’m ready for fresh blood! Besides, a lot of them will not be there for all three movies, anyway…oops, did I just spoil something?

I was leery about this one because I saw her as too pretty for the Katniss I saw in my mind but after watching the trailers and seeing how she transformed, I’m liking the choice.

Initially, I was worried that she was too old.  I hadn’t seen her in anything before, other than the snippets of scenes from the movie she was nominated for an Oscar for.  Plus, blonde!  But from what I’ve seen, she looks like she’ll do an exceptional job.  And really, have you listened to her interviews, she’s hilarious and smart and doesn’t take herself seriously.  I think she’ll be great. 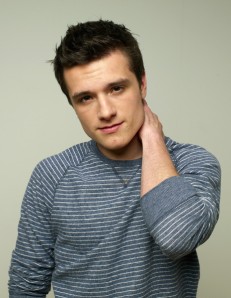 Oh Peeta!  I love Peeta and this guy is just absolutely adorable.  I don’t care that he is 10 years younger than me and breaks my rule of he can’t legally buy me a drink, I want to put him in my pocket.  🙂

Again, he’s kind of the opposite looks-wise as the character he portrays (he’s short and has dark hair), but I agree that he’s adorable.  I really wish he was taller (call it the Rupert Grint effect), but I guess I’ll live.  He’s also really funny and personable in interviews, like Jennifer.  I don’t know that I’ve seen him in anything before, but he looks totally capable.

I completely agreed with this pick day one.  They only thing wrong with Liam as far as I’m concerned is his choice in gf’s since I’m not a huge fan of Miley.  (It’s not so much her as her voice, it just hits me the wrong way.)

I am reserving judgment on this one.  I don’t know too much about his acting ability, but he kinda rubs me the wrong way.  We’ll see.

LOVE LOVE LOVE.  She is a hoot and I cannot wait to see the great clothes!  I think I’m going to go track down some Hunger Games nail polish for the occasion!

I love her.  She’s beautiful and hilarious.  The voice of Effie on the previews kind of irks me, but I guess it’s the desired effect.  I think she’ll be brilliant.  Our friend, Tee, over at YACrush, totally called this one.

Another hottie.  I always saw Cinna as someone much younger but I still love this choice because how the heck can you go wrong with Lenny Kravtiz?! 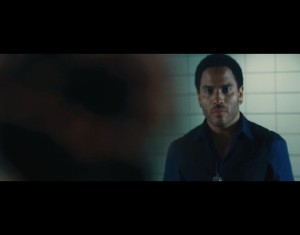 Lenny Kravitz is not who I pictured as Cinna, until he was actually cast.  Then I thought, BRILLIANT!  He has that quiet intensity that I picture in Cinna, plus he’s beautiful.  Let me tell you, it is hard to find a bad picture of this man.  (There was one where he kinda had a crazy eye thing going on, but I think it was just the camera angle.)

I love him in everything I’ve seen him in (ok I’m lying, I hated The Lovely Bones, but he was still a great bad guy in it) I have complete faith in him.

He’s such a great character actor, he can pull anything off.  I loved him in The Devil Wears Prada.  Long live the Tucc’!

I guess in my mind I saw Robert Downey, Jr., so I’m having a hard time letting the image go, but I’m sure he will be great.  Only thing that freaks me out isn’t really him as much as his character.  What is going on with his hair?!  Something is off.  It doesn’t look realistic. 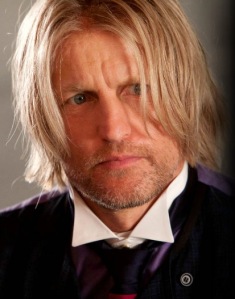 I agree about the hair.  And I never would have thought of Woody, who I LOVE, by the way (way hilarious), but it’s another case of “of course!” 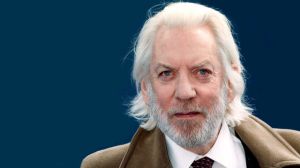 This is actually who I saw in my head when I read the book, hands down the best pick!!!  I hope they add more with him in all his evilness!! 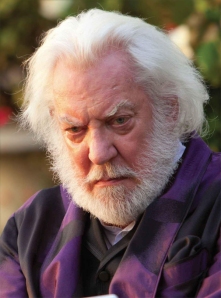 I love me some Donald Sutherland.  I’ve been a big fan since Animal House (yes, I was an infant).  I dislike when an actor I really like is cast a villian, but I can totally get behind this one.  And he looks so handsome in the first pic, don’t you think?

He is not mentioned by name once in Hunger Games.  We don’t learn about him until the second book, but it makes sense that they show him, he would be in the training room.  And they’ve obviously added scenes, because there is this, which was not in the books:

And I like Wes Bentley, cause he’s a doll, but he does play entitled and snotty pretty well.  Plus, the beard.  HELLLO!  It is truly inspired.  It should get it’s own paycheck.

So, that’s our thoughts about this impending movie.  We’re both very excited, especially about the hot guys.

What are your thoughts?  Do you like the casting?  Who do you think should have been played by someone else?

Join us next week when we dissect the movie AFTER we’ve actually seen it.  🙂 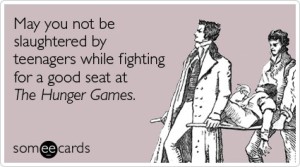 Have a Happy Hunger Games Weekend!

4 thoughts on “On The Eve of the Hunger Games…”