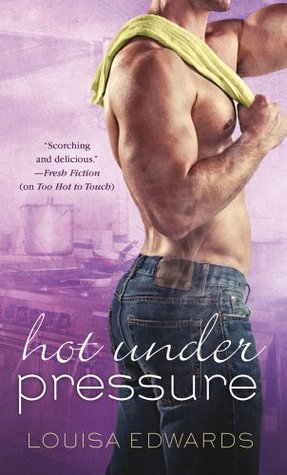 Prepare to turn up the heat with the final book in the sizzling “Rising Star Chef” trilogy from romance author Louisa Edwards.Henry Beck thought he’d already faced the toughest kitchen challenge of his life. After all, what could top sweating it out as a Navy cook on a submarine? But when he learns his competition for the title of Rising Star Chef is the sweet hippie girl he married…and left…ten years ago, the heat is on.

Now Beck and Skye Gladwell are going head to head in the finals…and sparking up old flames every time they touch. But Skye wants more than a win over the man who abandoned her when she needed him most—she wants a divorce! Then her sexy almost-ex makes a deliciously dangerous proposition. He’ll give in to her demands, but if his team wins the RSC, he has a demand of his own…one last taste of the only woman he ever loved.

The final book in the Rising Star Chef series by Louisa Edwards, Hot Under Pressure is about the enigmatic chef, Beck, and Skye, another chef in the competition who we were introduced to in the last book, Some Like it Hot, and who we learned is actually Beck’s estranged wife!  They’ve been married for ten years, but they’ve not seen each other almost the entire time because Beck joined the Navy to take care of their little family.  While he was underway, they experienced a tragedy that he couldn’t handle and they just kind of imploded.

Now, Beck and Skye are competing against each other in the Rising Star Chef competition, but they’re trying to avoid each other as much as possible, despite other people trying to use their (former) relationship as dramatic fuel in an attempt to get a major network to air the competition.  But it all comes to a head when Skye, rather out of the blue, asks him for a divorce.  And despite it all, they both still have rather lusty feelings for each other.

I really liked Beck’s character from the other two books in the series.  I don’t know what it is about the stoic, silent types, but they really float my boat.  We don’t know a lot about him and what we do know has been gleaned from people digging around in his past because he doesn’t volunteer any information.  Because he was so stoic and reticent about his past, it was gratifying to learn his backstory and be privy to his thoughts and emotions.

As for Skye, she couldn’t be more different from Beck, but their attraction to each other is understandable.  And it’s obvious that Beck still has feelings for Skye, but Skye is not the same girl that he left all those years ago.  She has a lot of issues to deal with, starting with her hippy parents who don’t like her chosen profession, to her long distance boyfriend and the merry misfits that work with her.  Skye was a very good heroine.  She didn’t suffer fools gladly, despite the way that others perceived her.  She was all over the place emotionally in regard to Beck because of her still simmering attraction to him and her lingering feelings of abandonment, but again, it was all very understandable given their history.

I really liked this book.  It was satisfying as a story in itself, but it also wrapped up the series quite nicely.  I think this one is my favorite of all Ms. Edwards books.

3 thoughts on “Hot Under Pressure by Louisa Edwards”