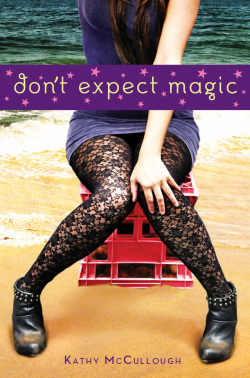 Delaney Collins doesn’t believe in fairy tales. And why should she? Her mom is dead, her best friend is across the country, and she’s stuck in California with “Dr. Hank,” her famous life-coach father—a man she barely knows. Happily ever after? Yeah, right. Then Dr. Hank tells her an outrageous secret: he’s a fairy godmother—an f.g.—and he can prove it. And by the way? The f.g. gene is hereditary. Meaning there’s a good chance that New Jersey tough girl Delaney is someone’s fairy godmother.

Even though she’s not the pink and sparkly type, Delaney soon finds herself with a client: Flynn Becker, a boy at her new school who’s hopelessly in love with a girl who doesn’t know he exists. Flynn’s wish is Delaney’s command. With her customized black boots and chopstick wand, Delaney does everything in her power to make Flynn’s wish come true. But what happens when a fairy godmother needs a wish of her own?

Once you get past the first few chapters this book is so freaking cute!  The book starts with Delaney flying to California to live with her dad (her mom has died).  She has a lot of classic teenage girl attitude that frankly I was more than willing to beat out of her and/r punch her in the throat (too much?).    She doesn’t like her dad, thinking he abandoned her and her mother, something her mother never corrected her about.  I think what bothered me the most about her attitude was her being rude to people at her school that did nothing to her other than exist.

From the get go she has issues with her dad.  After a confrontation ,her father takes her with him and she witnesses her father at work as a “life coach”.  Surprise, surprise he is a fairy godmother, or for gender equality, fairy godfather.  🙂  At first Delaney has a few issues believing this but quickly gets over it.  He explains that it is an inherited trait and even though she has yet to show signs of inheriting the gene, she begins working on her skills.  I like that the story doesn’t dwell here and moves on to her testing herself.  It keeps the story in the “happy” part as I like to call it.

I do have to say there is a lack of kissing in this book but I was so distracted by the adorableness of the story that I didn’t even notice till I was finished.  According to Ms McCullough’s website there is a sequel, Who Needs Magic? (EEEE!!), scheduled for the fall of 2013.  I cannot wait to see what happens next!