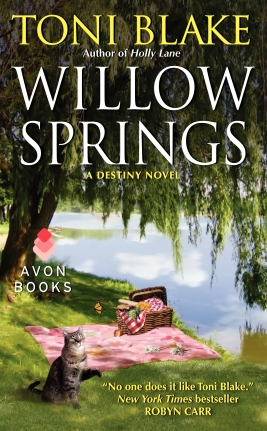 Amy Bright might be the best matchmaker in Destiny, Ohio, but she’s desperately shy when it comes to her own love life—and helpless when it comes to Logan Whitaker, the best friend whom she’s head-over-heels in love with. So Amy decides to become Logan’s secret admirer, sending him sensual love letters steamy enough to unseal their own envelopes. One letter leads to another, one thing leads to another, and then comes an unplanned kiss…

Overcoming a tragedy from his life as a firefighter, Logan needs a friend. Thank goodness for Amy. But when a woman from Logan’s past resurfaces right as some anonymous letters send Logan’s pulse hammering, suddenly he doesn’t know what he needs—a reliable friend, or a passionate lover? One smoking-hot kiss could change everything…but will it ruin a one-of-a-kind friendship, or show Logan and Amy that they’ve already found everything they need, right here in Destiny?

Amy Bright is that friend that is always the sweetest, most positive person you know (we all have one, right?). So when her best friend, Logan, falls into a depression he can’t shake, she does everything she can to get him out of it because that’s the kind of person she is. When he (drunkenly) kisses her, she’s caught completely off guard and finds she likes it. Then she smoothly jumps to the conclusion that she’s in love with him and has been for years. Logan, of course, is clueless. Like, seriously.

Because she cannot get up the nerve to tell him her feelings, she begins sending him sexy notes from a secret admirer. Then there’s the other woman, the confident, beautiful new person in town who’s drawn his attention and who Amy doesn’t think she can compete with.

This is my favorite kind of story, best friends who fall in love. Reading the first few books in the series, I knew that Amy & Logan were meant to be together (and not just because I read the blurbs on all of them immediately after beginning book one). The way they interacted made me think that Amy had feelings for him and was keeping it secret. So, immediately, this skewed from my expectations, but that’s fine. I liked that Amy kinda broke out of her shell but didn’t exactly reinvent the wheel to get Logan’s attention.

Her reaction to his flirtation with the new woman in town was heart-breakingly real. I hated that she had to go through that.

Logan, meanwhile, I’m still having issues with. I don’t want to say he was clueless again, but it bears repeating. It took him a while to get into the romance with Amy frame of mind and his uncertainty about beginnning a romantic relationship with her seems genuine. He wasn’t scheming and wasn’t trying to be a “player.” I liked him, he was a sweet, honorable guy, but I didn’t appreciate his leading on the two girls, which wasn’t really his intention. He didn’t know what he wanted. And sometimes his interactions with Amy read as a little skeevy because Amy being who she is and her past and who that made her (she’s very naive and innocent). But when Logan found out about her past, I think he took advantage, at least a little bit.

The way Ms. Blake wrote the love triangle made it very hard to know who to hope would win his heart because she brings the other woman’s POV into play. That was sneaky. Because now you like both of them.

Overall, I liked the book and loved Amy, but it was darker than I was expecting (because Amy is such a sweet, light-hearted person in the other books). And I did like Logan, but his depression made him a different person than he had been in the other books and probably made him do things he would not have done otherwise.

Anyway, I’m hoping the other woman (funny how I never mention her name…) is the heroine in the next book in the series. And if she is, I think I know who the next hero will be, so I’m very excited about that. 🙂