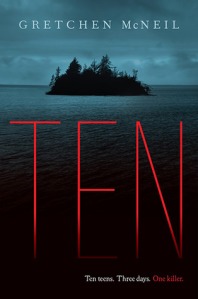 SHHHH!
Don’t spread the word!
Three-day weekend. House party.
White Rock House on Henry Island.
You do NOT want to miss it.

It was supposed to be the weekend of their lives—an exclusive house party on Henry Island. Best friends Meg and Minnie each have their reasons for being there (which involve T.J., the school’s most eligible bachelor) and look forward to three glorious days of boys, booze and fun-filled luxury.

But what they expect is definitely not what they get, and what starts out as fun turns dark and twisted after the discovery of a DVD with a sinister message: Vengeance is mine.

Suddenly people are dying, and with a storm raging, the teens are cut off from the outside world. No electricity, no phones, no internet, and a ferry that isn’t scheduled to return for two days. As the deaths become more violent and the teens turn on each other, can Meg find the killer before more people die? Or is the killer closer to her than she could ever imagine?

The book starts by following the arrival of Meg and Minnie to the island.  They meet up with T.J. and Ben, two other guests at the the party, who help them get to the house.  Once there they meet a few kids from a couple of other schools and everyone decides to just hang out, have some fun, and maybe watch a movie.  Only the DVD they find isn’t what they expected it to be.  It plays a horribly ominous message that affects several people who accuse the group of playing a joke on them.  Then the “fun” so to speak begins.  Bodies start piling up.  Red marks are made on the wall after each murder.  Is it someone in the house?  One of the guests?  Or is someone hunting them down one by one?
Page one you are already guessing on who might be the killer which just so happens to be a favorite past time of mine.  I know not everyone grows up in a reading household (it makes me sad to think about this) but I grew up with a mother that loved to read (She still does and I’m completely jealous of her being retired because she can read ALL DAY LONG) so we’ve had many of discussion about books and television shows on who the killer could be.  In fact I’ve already left her my copy of Ten so she can read it to discuss.  I know its been mentioned that Ten is a retelling in homage to “And Then There Were None” by Agatha Christie but I’ve never read that one (something I will remedy ASAP I swear) so my closet comparison to this one would be the tv show “Harper’s Island”.  Anyone remember watching that one?  It was billed as a “Scream” meets “And Then There Were None” so I think I’ve got a good one to go on.  I think Ten gives you the thrill factor people look for in scary movies and comparing the two Ms McNeil nailed this one.
I completely related to Meg and saw a lot of myself in her(minus being hunted by a serial killer of course).  I was really expecting just a horror book with a bunch of killing but I loved her story and seeing what she has been dealing with not only with her BFF Minnie but choices for her future.  It was a nice unexpected bonus to the story.  Though I loved her I wish someone else would have agreed with her quicker about the serial killer option.  Meg was the only one who was really worried that someone was killing people pretty early on.  One death?  Sure possible suicide or accidental death.  Three?  That’s what you call a serial killer people!
Like her first book, Possess, this one was a fast read as well and I know I’ve said it before and I will say it again:   Ms McNeil if you are writing, I’m reading.  I preordered this one and I’ll preorder her next one.  Overall to compare to her first book this one was a thriller but it didn’t quite have the creep factor of Possess. Still with that being said I don’t know if you should really read either one at night or alone.
4/5
Army of Ten Member
**~~Major Maggie~~**

8 thoughts on “Ten by Gretchen McNeil”