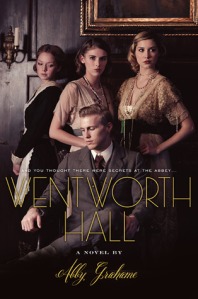 In conjunction with the season premiere of Downton Abbey this past Sunday, or first January book is Wentworth Hall by Abby Grahame.

Eighteen-year-old Maggie Darlington has turned into an entirely different person. The once spirited teen is now passive and reserved. A change Lord and Lady Darlington can’t help but be grateful for.
It’s 1912, and the Darlingtons of Wentworth Hall have more than just the extensive grounds to maintain. As one of Britain’s most elite families, they need to keep up appearances that things are as they have always been…even as their carefully constructed faÇade rapidly comes undone.
Maggie has a secret. And she’s not the only one…the handsome groom Michael, the beautiful new French nanny Therese, the Darlingtons’ teenage houseguests Teddy and Jessica, and even Maggie’s younger sister Lila are all hiding something. Passion, betrayal, heartache, and whispered declarations of love take place under the Darlingtons’ massive roof. And one of these secrets has the power to ruin the Darlingtons forever.
When scandalous satires start appearing in the newspaper with details that closely mirror the lives of the Darlingtons, everyone is looking over their shoulder, worrying their scandal will be next. Because at Wentworth Hall, nothing stays secret for long.

Maggie Darlington, eldest daughter of the Darlington clan, circa England in 1912, has just returned from a year abroad with her mother, new baby brother and the baby’s nanny, Therese.  She’s returned home a different woman.  She left a wild, spontaneous girl, but she’s more than matured since she’s been away.  She’s no longer the sweet, supportive sister to Lila or the friend she was to her maid Nora and their stable hand, Michael, with whom Maggie had been especially close.  And she’s clearly hiding something, but she’s not the only one.

Michael, the stable boy who grew up alongside the Darlington children, is confused as to why Maggie is not the same girl she was and why she hasn’t spoken to him in the two months since she returned.  He confides in his friend, Maggie’s maid, Nora, but Nora cannot account for Maggie’s sudden change, either.

Therese, the French nanny who arrived with Maggie and Lady Darlington after their year on the continent, seems to be hiding something, as well.  Not only that, but it seems she’s also figured out a few secrets.  What are her ulterior motives?  Is she trying to get close to Michael?

The Darlightons, a prominent old family in Sussex, England, has fallen into dire straights.  In an effort to resolve their cash flow problems, Lord Darlington has invited the orphaned seventeen year old twins of an old military cohort and friend to stay with them until they turn 18 and receive their inheritance.  He hopes they will repay his kindness with a little kindness of their own.  And what a nice surprise it would be if 18 year old Maggie would become engaged to young Teddy, the orphaned heir.  It would certainly solve a few problems.  Suddenly, the local paper is publishing a scathing satire that seems to slyly depict the Darlingtons and everyone is a suspect, from young Lila to the new houseguests and old servants.  Who is writing them?  Why is Maggie avoiding Michael?  What is Therese hiding?

I haven’t seen Downton Abbey, though it’s definitely on my list.  But I love a good historical romance, which is what I thought this would be.  It didn’t live up to those expectations because there are far too many characters for it to be classified as a Romance, not that there wasn’t love affairs aplenty throughout the book.  I’ve read a lot of Regency-era fiction, so I understand the background and the family’s adherence to the social structure and their need to avoid scandal of any sort.  I also understand the money issues and why Lord Darlington would try to marry off his daughter to the highest bidder.  I am not sure the audience that this book is aiming for would appreciate the importance that is placed on money and status and remaining in the good graces of society.

It’s hard to write a review without giving too much away, though the questions are answered far sooner than I expected them to be.  Initially I liked Maggie, who seemed to be the main character (she was the first person introduced to us, so I guess I gravitated to her), but as the story went on and we saw her through the other characters eyes, she seemed cold.  It wasn’t until I found out her secret that I began to warm to her again, which I guess was the point?  Also, I liked the other characters (especially Lila) and I felt more of a connection with them.  I wish there were more character development because without it, I wasn’t invested enough to really care what happened to Maggie and there was just too much going on that was resolved too quickly.  I am not sure if this is the beginning of a series, and if that is the case, it would be a great opportunity to learn more about these people and become more attached to them.

Liked our review?  Check out all the other great SC posts about this book!

Casting Call:  Who would you cast in Wentworth Hall? – Brittany @ The Book Addict’s Guide

Thanks to Simon & Schuster for sending us copies for review.