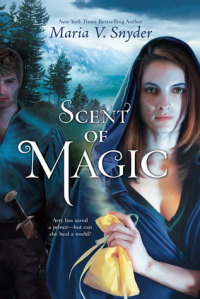 As the last Healer in the Fifteen Realms, Avry of Kazan is in a unique position: in the minds of her friends and foes alike, she no longer exists. Despite her need to prevent the megalomanical King Tohon from winning control of the Realms, Avry is also determined to find her sister and repair their estrangement. And she must do it alone, as Kerrick, her partner and sole confident, returns to Alga to summon his country into battle.

Though she should be in hiding, Avry will do whatever she can to support Tohon’s opponents. Including infiltrating a holy army, evading magic sniffers, teaching forest skills to soldiers and figuring out how to stop Tohon’s most horrible creations yet; an army of the walking dead—human and animal alike and nearly impossible to defeat.

War is coming and Avry is alone. Unless she figures out how to do the impossible … again.

Story Breakdown:  Picking up a week after the end of Touch of Power, Avry decides to infiltrate Estrid’s army in disguise to find out information about Tohon’s army and try to get close to her sister since everyone thinks that she is dead from the plague after rescuing Ryne.

Favorite Quote:  If you had died, I would have killed you.

Avry:  Well this is a hard one to explain.  I still like her but something is off for me about her after reading the second book.  She is more confident in her abilities as both a healer and a fighter but her common sense has gone out the window.  I think she chooses the wrong battles to fight.  Complete judgment is being reserved at this time.

Kerrick:  What the French?!  Why can’t he catch a break?  Also, while I realize they weren’t with him in the book much I LOVE his rag-tag team of monkeys.  Every book needs a bit of comic relief.  I like this new side to Kerrick but I’m not a fan of the price he is having to pay to get there.

Ryne:  Guys, I have to admit it.  I didn’t care for him in book one and still don’t.  I realize he is a good guy (or should be, you never know!) but I feel like his motives aren’t always for the good of the people.  At times I felt his actions made him look selfish.

Though the book was a great follow-up it fell into a few of my book two issues.  I’m not sure about all the extra people who “liked” Kerrick or Avry but I really hope this doesn’t turn into some kind of love square.  Also, I felt the second half of the book was almost another story all together from the first.  Everything started to pick up but so much action was squeezed in there that I wish some of that had been in the first half where it just felt like they were sitting and waiting at times.  For me Scent of Magic wasn’t quite as good as Touch of Power but still very enjoyable and I was very happy to be in the Fifteen Realms again.  Bring on book three!