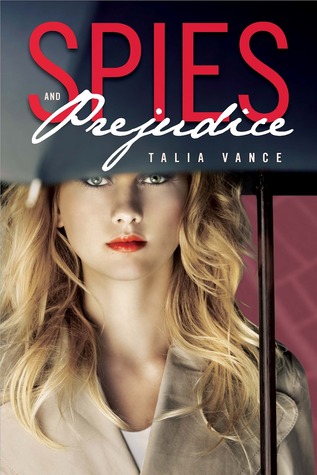 Berry Fields is not looking for a boyfriend. She’s busy trailing cheaters and liars in her job as a private investigator, collecting evidence of the affairs she’s sure all men commit. And thanks to a pepper spray incident during an eighth grade game of spin the bottle, the guys at her school are not exactly lining up to date her, either.

So when arrogant—and gorgeous—Tanner Halston rolls into town and calls her “nothing amazing,” it’s no loss for Berry. She’ll forget him in no time. She’s more concerned with the questions surfacing about her mother’s death.

But why does Tanner seem to pop up everywhere in her investigation, always getting in her way? Is he trying to stop her from discovering the truth, or protecting her from an unknown threat? And why can’t Berry remember to hate him when he looks into her eyes?

With a playful nod to Jane Austen, Spies and Prejudice will captivate readers as love and espionage collide.

Source:  eARC from Egmont/Netgalley for an honest review (but when Netgalley upgraded, I lost it off my bookshelf, so I actually got it from the library)

Favorite Quote:  Flirtation is not a book on my shelf.

I wanted to read this book because it’s another take on Pride and Prejudice, my favorite book.  What made this different is that our heroine, our Elizabeth, is Berry, who is a teenage private investigator, working for her dad.  It was an interesting concept, but I’ll read just about anything that reimagines Pride and Prejudice, as I’m sure you know.

What was great about this book is that it isn’t just a reiteration of the book, word for word, like some books I’ve read that just changed the setting and maybe the characters names.  Sometimes, all the characters and setting and scenes feel forced to fit into the P&P mold, but for this take, P&P was more of a muse.  The same basic backbone was there, but Talia Vance made the story her own, which I LOVED.

Berry’s mother died years ago and something happens that brings up questions for Berry, so she starts to investigate her death (suicide/murder?).  At the same time, she gets caught up with a couple of new boys at school.  She’s like our Elizabeth, though, in that she’s not all that interested in boys at the moment, though she’s very reluctantly attracted to arrogant Tanner and she’s also drawn to elusive Drew, her Wickham. Throw in there her best friends/partners in crime, her dad possibly, finally moving on, and a mystery that seems to be tied to her mother’s death, and it was a very well paced, smart, fun book. I liked it a lot.  I wanted to know what was going on, I read it 2 sittings (because I had to go to bed).  I also really liked Berry and her friends.

I had seen several people give it okay marks, 3/5, which doesn’t really recommend a book to me, but it was better than I was expecting because of those reviews. I would actually associate it with the Heist Society novels as well as Also Known As by Robin Benway.  I would definitely read more by this author. My only issue is that it was kind of open ended and I could find no evidence that this is going to be a series, but I really hope it is because I would definitely read more about Berry.

2 thoughts on “Spies and Prejudice by Talia Vance”