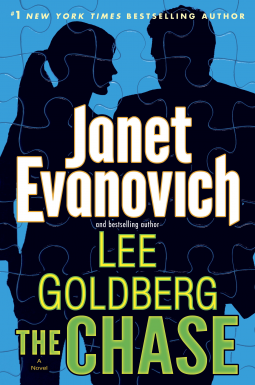 Janet Evanovich and Lee Goldberg, New York Times bestselling authors of The Heist, return in this action-packed, exciting adventure featuring master con artist Nicolas Fox and die-hard FBI agent Kate O’Hare. And this time around, things go from hot to nuclear when government secrets are on the line. Internationally renowned thief and con artist Nicolas Fox is famous for running elaborate and daring scams. His greatest con of all: convincing the FBI to team him up with the only person who has ever caught him, and the only woman to ever capture his attention, Special Agent Kate O’Hare. Together they’ll go undercover to swindle and catch the world’s most wanted—and untouchable—criminals. Their newest target is Carter Grove, a former White House chief of staff and the ruthless leader of a private security agency. Grove has stolen a rare Chinese artifact from the Smithsonian, a crime that will torpedo U.S. relations with China if it ever becomes public. Nick and Kate must work under the radar—and against the clock—to devise a plan to steal the piece back. Confronting Grove’s elite assassins, Nick and Kate rely on the skills f their ragtag crew, including a flamboyant actor, a Geek Squad techie, and a band of AARP-card-carrying mercenaries led by none other than Kate’s dad. A daring heist and a deadly chase lead Nick and Kate from Washington, D.C., to Shanghai, from the highlands of Scotland to the underbelly of Montreal. But it’ll take more than death threats, trained henchmen, sleepless nights, and the fate of a dynasty’s priceless heirloom to outsmart Fox and O’Hare.

After Kate and Nick are thrown as unlikely partners in The Heist, they return in The Chase for further misadventures.  This time, they are needed to recover something that was stolen years ago and needs to be returned to the Chinese government.  The problem is that the person who stole is is a very important, very dangerous former Chief-of-Staff, Carter Grove, who now runs a very exclusive security firm and has no qualms about killing to get what he wants.

Kate and Nick assemble another rag-tag group of people to help con Grove and retrieve the artifact, but it’s much harder than they thought because now Grove has them in his sights and he isn’t bluffing.

What follows is a highly entertaining romp through China, Canada and the good ole’ USA.  What I love about this series, besides the simmering sexual tension between Kate and Nick, is watching Nick do his job.  He’s a brilliant con-man and pretty charismatic, which I guess is what he needs to be.  Even Kate, a seasoned FBI agent, nearly cannot resist him.  It’s fun watching her remind herself that he’s a criminal and they don’t belong together.  She’s gonna give in, though, and she totally should.  Nick proves to have a much higher moral caliber than you would expect.  It’s just a matter of time.

This a fun book and a nice change of pace from the romances I usually read.  I do love a good mystery and watching the bad guy get taken down always makes my day.  I’m looking forward to more of the series, which continues in November.