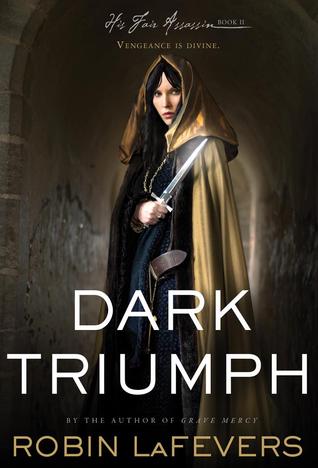 When Sybella arrived at the doorstep of St Mortain half mad with grief and despair the convent were only too happy to offer her refuge – but at a price. The sisters of this convent serve Death, and with Sybella naturally skilled in both the arts of death and seduction, she could become one of their most dangerous weapons.

But her assassin’s skills are little comfort when the convent returns her to the life that nearly drove her mad. Her father’s rage and brutality are terrifying, and her brother’s love is equally monstrous. But when Sybella discovers an unexpected ally she discovers that a daughter of Death may find something other than vengeance to live for…

Picking up where Grave Mercy left off, we join Sybella who is undercover to gain information in D’Albret’s holding as she is forced to participate in and commit horrible acts against Brittany’s people who are loyal to their Duchess as D’Albret seeks to rule.  Her plans are slightly altered when Beast, a firm supporter of the Duchess, is kidnapped during battle and she is directed to save him from D’Albret’s clutches.

Sybella – Oh this broken girl.  I wanted to hug her so badly.  I don’t think any reader could not want to help/root for her after knowing the life she had to live.

Beast – Probably one of my top male MCs in a long time.  I loved the fact that he was portrayed as both a warrior and a gentle giant.  To be so accepting and forgiving brought tears to my eyes more than once.

D’Albret – If you want to talk villains this is your man.  WOW.  The hate I felt towards him cannot be out into words.  This man deserves a long, drawn-out painful ending.

Coming into this book I was told be several other bloggers that out of Grave Mercy & Dark Triumph that DT was by far their favorite.  As with GM, Dark Triumph had romantic elements but was mainly swoon which is something I actually prefer.  It is much darker (huge plus) and more character driven but as with GM it was a beautifully written book that has earned a spot on my “keeps” shelf so that I will be able to read it again and again.  Sybella was by far one of the most hurt (but always somewhat hopefully) MCs I’ve ever read and look forward to any time we might get to spend with her in Mortal Heart, which frankly cannot get here soon enough for me.  Gorgeous.