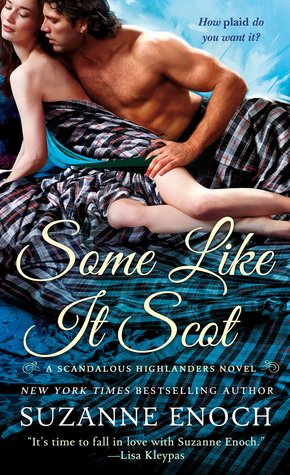 Munro MacLawry has always lived up to his nickname “Bear.” Strong and brawny, he’s known in his clan to be fiercely protective. Sadly for him, each of his siblings becomes “less highlander” as they get married, and Bear is left rowdy and alone with no one to protect. That is, until a routine hunt leads to the most alluring of creatures…

Catriona MacColl doesn’t care to amuse the brash, strong, and sexy highlander she stumbles upon in the woods. She’s too busy hiding with her sister from marriage into English society. Already well-equipped with a bull’s-eye shot, she doesn’t need a protector, no matter how badly her body burns for him. But as Cat’s boyish nature gives way to her more feminine desires, she’ll have to stop fighting the tide and listen to her heart….

Source: netgalley via publisher, St. Martin’s Press. This galley was given to me in exchange for an honest review and all opinions are my own.

On a whim, I picked up Mad, Bad, and Dangerous in Plaid by Suzanne Enoch at the library. I think it was the Scottish-ness of the book that called to me, because I am usually hesitant to read historical romances by authors I’ve never read before. Mad, Bad, and Dangerous in Plaid is the third book in the series, Scandalous Highlanders, about a family of Scots living sometime in the 18th century. They’re very proud and stubborn and hot. I quickly decided that I needed to read all of the books. I was even lucky enough to find the fourth book on Netgalley and immediately requested it. And then I read all four back to back. I think you can determine from this that I really liked the series. It’s quite funny and is very different from the usual historical romances I read, which often take place in England, namely London, and are populated by English men and women. Also, most of the dialogue is in the Scottish brogue and could be irritating, but I found it charming and cute.

The fourth book, Some Like it Scot, is about the youngest son, Munro, or Bear, as he’s called. Bear is huge and intimidating. His family sees him as all braun and very little brain. I loved that he knew this and allowed his brothers and sister to continue to see him that way, but he (and we) knew differently.

Munro stumbles upon a woman who is squatting at one of his family’s dilapidated buildings and is intrigued by her. She seems capable, but she’s a woman, so she must need his help.  He goes above and beyond for her, even though she makes it clear that she doesn’t want his help and she wishes he would just leave, already. But Bear can’t. He’s drawn to this woman, Catriona. I loved how, once he stumbled upon her, that was it. She was it for him and he was going to make her his. So deliciously ironic because he is the one that refuses to be tied down. The bigger they are, and all that…

There are a lot of things keeping Cat and Bear (lol, I just realized that they’re both named after animals) from being together and for once it’s not their inability to show their feelings for each other. They both have family obligations that are frustrating to this modern chick. But the romance was sweet (and hot) and both main characters were interesting and unpredictable, which is appreciated.

One of my favorite characteristics of this series is the involvement of the family. There are some serious miscommunications and meddling by family members, but they certainly meant well.  I really loved this family, as I did read all of the books quickly. I was sad that this was the last in the series because I wanted more highlander fun. Suzanne Enoch was a new author to me and I guarantee that I will be reading more of her books.