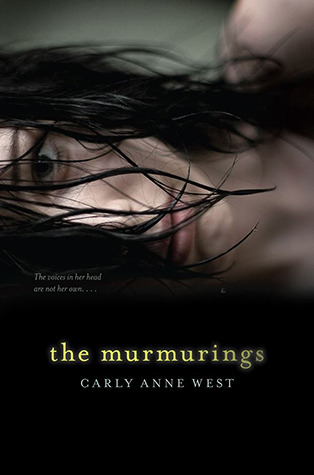 The Murmurings by Carly Anne West

Everyone thinks Sophie’s sister, Nell, went crazy. After all, she heard strange voices that drove her to commit suicide. But Sophie doesn’t believe that Nell would take her own life, and she’s convinced that Nell’s doctor knows more than he’s letting on.

As Sophie starts to piece together Nell’s last days, every lead ends in a web of lies. And the deeper Sophie digs, the more danger she’s in—because now she’s hearing the same haunting whispers. Sophie’s starting to think she’s going crazy too. Or worse, that maybe she’s not….

Sophie is not only dealing with her sister’s untimely and very unusual death, but the loss of her mother as she knew her, wrapped in her own grief with alcohol being her support.  If that wouldn’t be enough Sophie has started to hear things.  Murmuring voices just like her sister did before she was committed.  Convinced her sister wasn’t crazy and that she isn’t following in her footsteps Sophie tries to piece together what happened to her sister after she escaped the mental hospital and to try to stop the same thing from happening to herself.

Sophie – She isn’t exactly experiencing the typical teenage life right now.  Overall I liked Sophie though her thought process was hard to comprehend at times which was a draw back for me and I just couldn’t make a connection.

Evan – Still a bit of a mystery to me.  I wish we would have had some of the book in his POV or a bit more of his background to get to know him better.  His motives for pursuing Sophie aren’t given their relationship has a slight awkward start.

Nell – Though he is already dead at the beginning of the book, Nell (and her journal) play a big part in the story.  If we would have been able to read more of the journal itself I think it would have helped build more on what happened to her, Sophie, and the others at the mental hospital by way of the staff and their interactions.

Overall Thoughts:  I enjoyed the idea behind this book as well as darker quality it projected.  At times the books descriptions read like scenes from a horror movie which I liked, surpising myself since I’m a bit of a wimp when it comes to actually watching them.  The second half of the book really picked up the pace and brought in the action factor as well.  I think the only downside for me was that there was a bit of repetition on facts we had already learned.  Maybe if they would have been scaled down a bit there could have been a little more wiggle room in the start-up of Evan and Sophie’s relationship to have a more cohesive start.  If you are looking for a slightly darker read then I would recommend picking up this one.

Liked our review?  Check out all the other great SC posts about this book!

Casting Call:  – Who would you cast in The Murmurings?  – Tee @ YA Crush

Thanks to Simon for providing ARCS for review on the SC.

5 thoughts on “The Selective Collective: The Murmurings by Carly Anne West”